You can find out about and read the submitted plan here:

If you need the Plan in an alternative format please email ramsgate-future@thanet.gov.uk

What is the Town Investment Plan?

The aim of the Town Investment Plan is to outline the potential opportunities in supporting Ramsgate’s Future. It has been created by the people of Ramsgate to define what they would like for the town and identify key priorities of work to achieve this.

It creates a tool for organisations to use for their own funding bids, and provides justification to potential investors for why they should invest in the town. And, crucially, the priorities and projects included are those that have been created by the local community.

The plan includes new evidence which maps key characteristics of the town and a new spatial plan which identifies short, medium and long term actions to help give Ramsgate a brighter future. It has been shaped by the community and stakeholder engagement that took place in May / July 2021.

Projects include those where funding has already been successfully secured, including the Levelling Up Fund, High Street Heritage Action Zone and Future High Street Fund, as well as aspirational projects which the communities wish to deliver, but where additional investigation may be required and funding sourced. The Town Investment Plan identifies which projects can have the most significant impact and will contribute to the overall vision of the town.

Want to include a section with the infographic about how the TIP was developed and the roadmap, not sure if this should go on a separate section or can go within this section.

What is the Town Investment Plan? 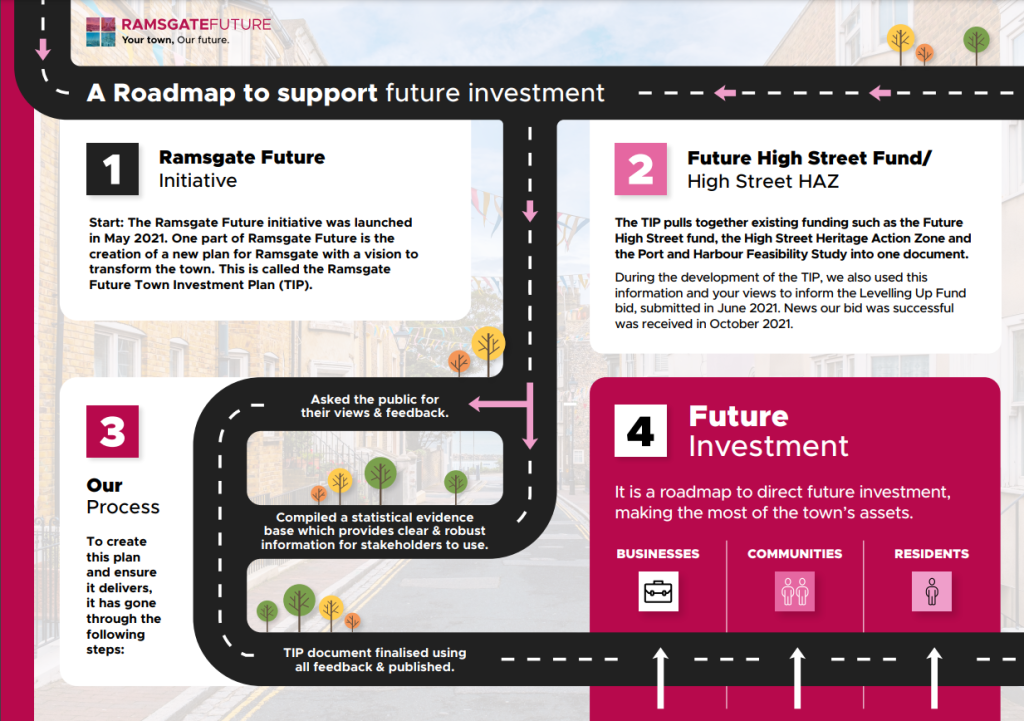 The third stage is titled ‘Our process’, which reads: “To create this plan and ensure it delivers, it has gone through the following steps: we have asked the public for their views & feedback; we have compiled a statistical evidence base which provides clear & robust information for stakeholders to use; we have finalised the Town Investment Plan document using all feedback and published.”

The fourth part – Future Investment – reads: “It is a roadmap to direct future investment,
making the most of the town’s assets.” We can see three streams of ‘traffic’ running parallel here: businesses, communities and residents.

How we developed the Town Investment Plan 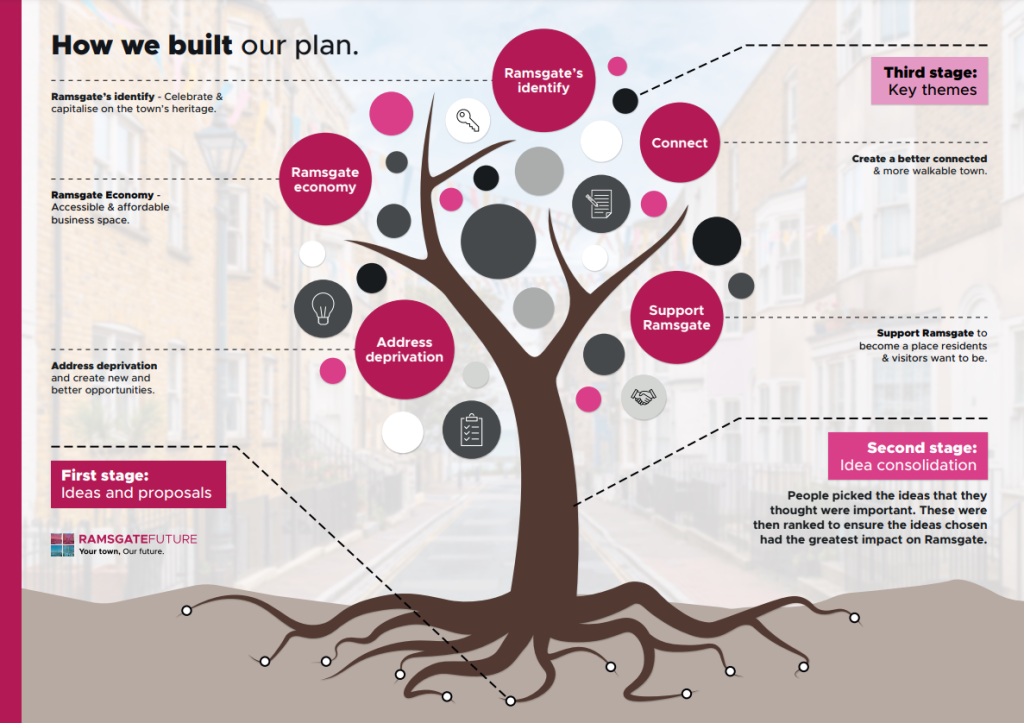 This infographic is of a tree showing how the plan grew.

At the first stage, through engagement with stakeholders and residents, many suggested ideas and proposals were brought together; forming the tree’s roots.

The trunk of the tree represents the consolidating of the ideas. People funneled all the ideas to those that they thought were important. These were then ranked to ensure that ideas chosen had the greatest impact on Ramsgate. By using statistical evidence local people and groups consolidated the various ideas to create key themes for the Plan.

The branches spreading from the themes, indicate that each theme has priorities and actions, all of which aim to address the issues raised.

All these key elements in developing the Plan involved various forms of engagement, including workshop sessions, surveys, one-to-one meetings and meeting people on the street.