This specialist heritage and building contractor has been responsible for the restoration, repair, relocation, re-creation and reinstatement of over 25 historic bandstands throughout the UK. Past work includes the historic bandstand in Alexandra Park, Windsor, which was built in 2016 to commemorate Her Majesty, The Queen’s 90th’s Birthday and to mark her becoming the UK’s longest serving monarch.

The bandstand in Ellington park is an original Victorian bandstand built in the early 1900s. Research has shown it is a MacFarlane Company pattern 279. The MacFarlane Company was a notable producer of decorative ironwork, including bandstands, during the Late Victorian Period. It operated  from Saracen Works foundry in Glasgow and sent its products around the world.

Cllr Steve Albon, Cabinet member for Operational Services, Thanet District Council said: “We are excited to have a specialist team on board to undertake works on the bandstand. It’s such an iconic feature within Ellington Park and it being restored to its former glory is a major milestone in the park’s regeneration journey.

All the new panels and cast works will be made in the foundry offsite, meaning the bandstand has been carefully removed, transported to the foundry and re-installed at the same location in Ellington Park. The historic paint colours will be analysed and recreated so the bandstand will be restored to its original colour scheme.

Alan Linfoot, a member of the Friends regeneration team said:  “We were delighted to see Lost Art had copies of the original Macfarlane pattern books and understands the process which our bandstand will undergo. The passion and expertise of the team really inspired us when we met with them in February and we look forward to working with them. Lost Art was selected not only for its expertise in heritage bandstands but also because it cares about the communities where the bandstands are based ”.

For other projects Lost Art has carried out community engagement, workshops and visits to the foundry. The restoration process will be documented for current and future park visitors.

Damian Liptrot, Lost Art said: “We are very proud of our history of community engagement and make all possible efforts to engage with the community and interested groups as part of our commitment to a full service of work before, during and after a project”.

The bandstand work has begun on site in Ellington Park. The bandstand has been carefully dismantled and shipped to the workshop, where it can be recast, restored and painted.  It will be returned later in the year. This is part of the large scale works in the park. We will also be launching the archive website, starting gardening and wildlife projects and setting up the community run cafe.  These works will preserve the park for the enjoyment of many generations to come. 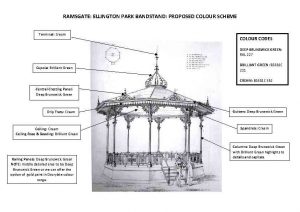 Margate Creative Land Trust (Margate CLT) has appointed six independent leaders to the Board of Trustees to lead its vision and establish Margate as one of the most prominent creative production hubs in the UK.

A joint decision has been made between the Council and Chief Executive, Madeline Homer for her to leave Thanet District Council.