From 4 May 2023, voters in England will need to show photo ID to vote at polling stations in Thanet Elections | Find out more | Last updated: January 18, 9:39 am

What is a Townscape Heritage Initiative Grant Scheme?

Townscape Heritage Initiative (THI) Grant Schemes are jointly funded by the Heritage Lottery Fund and Thanet District Council.  You can learn more about the programme on the HLF’s website.

The main objectives of Townscape Heritage Initiatives are to:

THIs work within particular conservation areas and highlight their unique heritage.

The Dalby Square, Cliftonville, Townscape Heritage Initiative (THI) Grant Scheme began in January 2013 and will run until June 2019 .  Focusing on a square in Cliftonville West that is a traditional heart of British seaside holidays, the scheme aims to help change perceptions of Cliftonville West.

Find out more about the Dalby Square THI grant scheme below.

Thanet is lucky enough to have had a history of successful grant schemes, each lasting 5 years. They are:

With a budget of £1,500,000 the scheme lasted from 2009-2013. A total of 62 grants were offered, despite experiencing a double-dip recession. Alongside capital projects (some of which can be seen below), the scheme also helped fund:

Map of the THI Area: 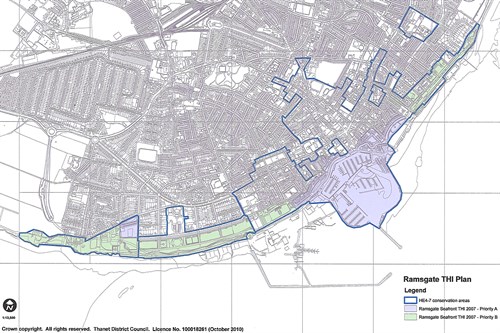 Running from 2003 to 2008, the Margate Old Town Townscape Heritage Initiative (THI) helped to transform some of the previously neglected and run-down buildings within Margate’s Old Town into attractive, vibrant properties.  The scheme attracted a budget of £1.2 million, with funding from both the Heritage Lottery Fund and Thanet District Council, and substantial contributions from the Single Regeneration Board and European Regional Development Fund. It reached a total spend of 94.8%, and its success helped to pave the way for the Ramsgate THI.

Here are just some of the completed projects which we feel have been particularly successful:

The Dalby Square, Cliftonville, Townscape Heritage Initiative (THI) Grant Scheme began in January 2013 and ran until September 2019. It was funded 75% by the Heritage Lottery Fund with 25% match funding from Thanet District Council.

The objectives of the Dalby Square, Cliftonville Townscape Heritage Initiatives were to:

The ‘Design for Future Climate Phase 2 Programme: Dalby Square, Cliftonville’ project was an innovative project exploring how historic buildings in Thanet will react to climate change.

The project was instigated by the team running the Townscape Heritage Initiative (THI) schemes, with specialist consultants carrying out the investigations.  It was 100% funded by the Technology Strategy Board.

The grant allowed Thanet District Council to commission a predictive, climate change scenarios model specially for Cliftonville in the year 2080. This was produced by the University of Exeter using their Prometheus data sets along with data from UK Climate Impact Projections.

Buildings of the type found in Cliftonville are of a style that is found in many British seaside towns and the findings of the project can be reproduced in other places. One of the undertakings made in the initial application was that the Council will use its elected Member Cabinet system to endorse the recommendations of the Design for Future Climate Change project.

Thanet District Council put together a multi-disciplinary team to study the buildings and gardens in Dalby Square against the projected climate scenario of Cliftonville in the year 2080. The team included an Architect, a Landscape Architect, a Quantity Surveyor, a Sustainable Design Consultant and a Regeneration Consultant. The Kent School of Architecture was also involved during the earlier stages of the programme.