We are currently experiencing technical difficulties with our telephony system, we are working to resolve this as soon as possible. We apologise for any inconvenience caused | Last updated: February 1, 12:33 pm 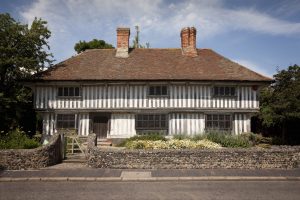 The Tudor House is one of the oldest buildings in Margate, dating back to the early 1500’s.  During the centuries it has been altered including being divided into three cottages in the 1860’s.  Following the Second World War the importance of the building was recognised and it was fully restored.  The building retains much of its original fabric, plus some later additions including plaster ceiling detail dating from the Stuart period.

The building consists of a hall, with three rooms on the ground floor and two large rooms on the first floor.  There are large fireplaces on both floors.

The Tudor House is opened by volunteers and access can be arranged outside of its normal opening hours.

There are a number of cafés and restaurants in the Old Town.